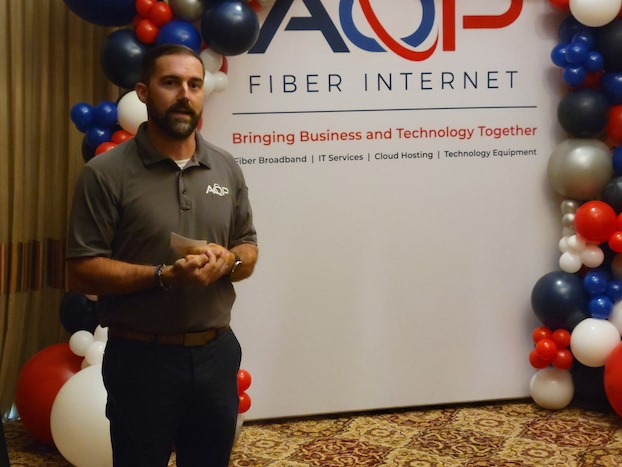 AOP President Brandon Greene announces that AOP Fiber Internet is available at L’Auberge Casino Resort on July 20th. The casino is one of the first buildings in the city to have a 10 gigabyte AOP dedicated internet connection with public wifi. (Rita LeBleu / American Press)

Some Lake Charles residents and businesses now have another option for accessing the Internet. AOP Fiber Internet is here. This family business has been active in the lake region since 1990 and announced the news at L’Auberge Casino Resort on Wednesday July 20th.

“We thank you for this investment,” Mayor Nic Hunter said during the groundbreaking ceremony. “We need options in Lake Charles and you provide much-needed options.”

AOP chose the location for the groundbreaking ceremony because the casino is one of the first buildings in the city to have a dedicated AOP 10 gigabyte internet connection with public wifi.

AOP speeds start at 500 Mbps and go up to 20 gigs. AOP is a Tier 1 Internet Service Provider (ISP), just like AT&T or Suddenlink, according to Brian Bernhardt, AOP.

Fiber optic internet is the fastest and most reliable form of internet connection with faster speeds and reliability not usually provided by cable. In addition, underground fiber means a weatherproof fiber network.

Greene did the math. From the time the business opened its doors to the time it turned to the first customer, it took less than 200 days.

“In this industry, it’s unheard of,” he said.

AOP was the first company in the region to install color copiers.

“We’ve watched the technology evolve,” Greene said. “We started making these big, bulky printer cables that we ran around people’s work areas just so we could print. And I’m sure you’ve noticed that every time you sit down at someone’s computer and troubleshoot a problem, you’re immediately listed as a computer expert.

AOP saw the need for this service.

“We invested in moving two Microsoft engineers here from the West Coast and started an IT division,” Greene said.

When cloud infrastructure became available, local businesses saw the benefits, but feared it would be too expensive, difficult to implement, and didn’t really understand what it was, AOP hired a team of Linux engineers and built a cloud environment from scratch.

“Inc. put us on their list of the fastest growing companies in the country,” Greene said.

“The network we’ve built to run this cloud infrastructure has worked flawlessly through hurricanes, storms, and floods. It was placed in multiple data centers in New Orleans, Atlanta, Dallas, Houston and Baton Rouge and stayed up 100%,” according to Greene.

“It performed phenomenally, did everything it was supposed to, plus some. It was easy said, but not so easily accomplished,” Greene said. was because of the team.”

It was then that they decided to provide a fiber optic network. The students worked from home. Employees were working remotely.

“A few months later we became a utility company,” Greene said. “It gave us access to roadside land and the ability to install our own infrastructure.”